What is the Issue?

NOTE:  The Wisconsin Public Service Commission issued its Final Decision in the Matter of MGE’s Proposed Rate Increase in December 2014.  It allowed MGE to increase it’s fixed charges for residential service from $10.44 to $19.00/month for electric service and $12.00 to $21.88/month for natural gas service.  MGE also agreed to implement a community energy conversations process to get input from their ratepayers on future rate designs and other policy issues.

Madison Gas & Electric’s Billing Scheme at a Glance  – 2015
A one page handout by RePower Madison outlining the impacts of the what MGE calls the “Grid Connection and Customer Service Charge,” the fee ratepayers pay before any energy is used. In 2014, MGE proposed a radical increase to these mandatory fees, which was met with broad community opposition, but approved by the Wisconsin Public Service Commission (PSCW) and went into effect on January 1, 2015.

In 2014, Madison Gas & Electric (MGE) proposed a radically new billing system to the Public Service Commission (PSC) that encourages consumption of electricity, increased use of coal resulting in higher greenhouse gases.  The proposal will increase the fixed charge that everyone pays per month regardless of your electricity usage by about 80% (~$10.5 to $19) while lowering the energy charge (cents per kilowatt hour) by about 8%.

The net effect is to increase electric bills for customers who use relatively little electricity and decrease bills for larger users.  The proposal will stifle customer investments in energy efficiency and renewable energy due to the uncertain direction of future rates.   The misguided approach will shackle community initiatives to build environmental sustainability into their own operations and create an unwelcoming environment for businesses and residents pursuing clean energy.

Out of touch with Madison’s community values?

A dark future for solar
Investment returns on solar systems are based on the payback rate per kilowatt hour (kWh). MGE is proposing to decrease the per kWh rate, lowering the rate of return. A solar system would take longer to pay for, with less incentive to purchase a new one. Is decreased incentives and a lower payback on solar what you want?

Robbing from the poor to give to the rich
Across the country, low income customers use less energy than higher income. With MGE’s billing plan, low and middle income customers are more likely to see an increase in their utility bills than high income users whose bills are likely to decrease. Does charging more for those with lesser means match your values?

MGE needs to address climate change!
Climate change is caused primarily by fossil fuel use. MGE’s proposal would decrease incentives to reduce energy use or install solar, resulting in more fossil fuels use, and continuing to worsen climate change. Is this the heritage you want to leave for future generations?

Madison Sustainability Plan improvements
Madison’s Sustainability plan, which MGE was a party to, includes 25% renewables by 2025, and 80% CO2 reduction by 2050. MGE’s plan would make this harder to achieve. Does this fit Madison’s values?

The new green is black
MGE bills themselves as a green energy company in tune with this community, but currently 88% of their energy is mainly fossil fuels – and most of that is coal. Do you want greenwashing – or green energy?

Don’t we deserve an energy company that reflects this community’s priorities and values? 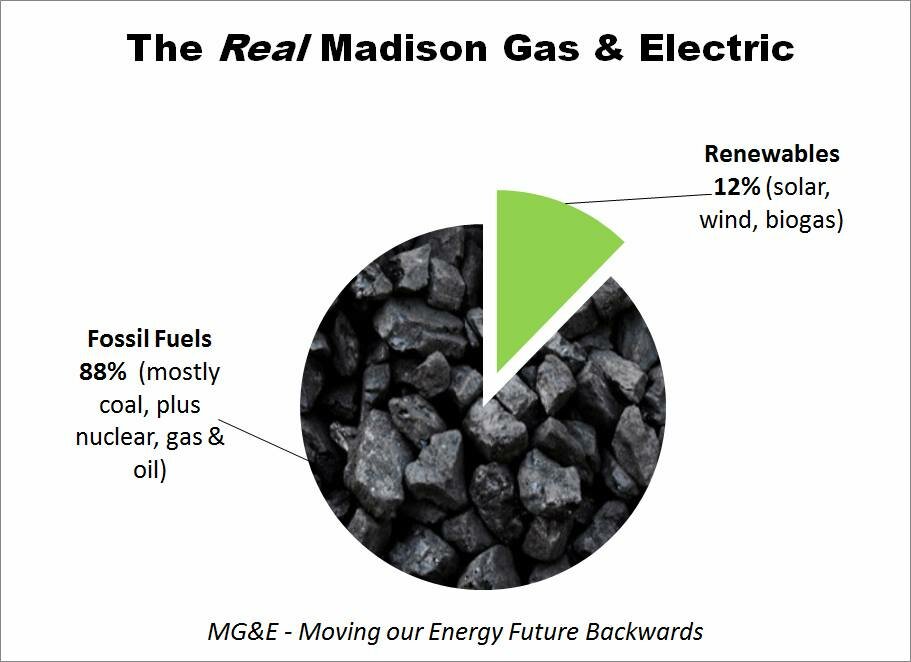 What you can do?